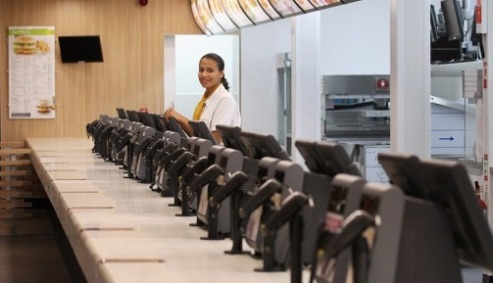 The first thing that people should know about 21st century middle class parenting, is that it is certainly a multi-faceted endeavour. As our society complicates itself even further, it seems that there are ever more aspects of child-rearing that parents need to consider. I observe that those most keenly worried about, include technology, education, outdoor play, and the subject of the post, diet.

I first began considering the subject following some brief comment amongst this Guardian article discussing the now infamous Olympic Park branch of McDonald’s, known for it’s status as the biggest in the world, and for the draconian rules that they have tried to impose on neighbouring food outlets within the grounds. The article itself begins with cautious observations on part of some new customers that we can assume are relatively well-to-do. One thing I noticed immediately (that will become more significant later) is that these families are exceptionally quick to point out their status as new customers to the establishment. Entirely unsurprisingly, the attached comment stream was largely filled with the right-thinking Guardianista remarks that I expected. Just as the people featured in the article had been, those assembled were fervent in stating their opposition to and abhorrence of McDonald’s. One comment that piqued my interest was an anecdote referring to the author’s friend who lived in Poland. He explained that his friend had a three year old son whom she had taken great care over the diet of (including only allowing him to drink water), who had come home from his nursery asking if she would take him to McDonald’s. This was a result of Ronald McDonald himself having visited his school and offered the children free toys. He detailed in horror that even though the mother had tried to feign ignorance of the existence of the Golden Arches, the cause was lost. Other contributors to the comment stream were similarly perturbed by the incident, as was I to an extent, myself not being a fan of aggressive marketing to children. However, I found myself alone in being somewhat more concerned that the aforementioned mother figure only allowed her child to drink water. Not only does this strike one as hideously over-zealous, but also raises concerns as to how healthy such a regime is for a growing child!

These objections tapped into my more general annoyance with the levels of paranoia mounting in 21st century middle class parenting. Among this, is the catastrophising of minor childhood nuances into incidents catalysing long term negative change in a child’s life. The problem of diet sits at the very core of this issue. Of course, I understand and respect the everyday basics of the trope. Children shouldn’t eat too too much food that is prone to affecting their mood or weight to an unhealthy degree, they should eat fruits and vegetables and try and get all their required vitamins and minerals. But I can’t help but feel that these concerns have evolved into something altogether more dangerous. We have gone from broadly wanting the best for our offspring, to obsession over minor detail and treating any lapses as some kind of trauma. You may wonder why I have chosen to pick on the middle class specifically. It’s simply because I see this as a thoroughly middle class phenomenon.

This notion became set in my mind whilst watching the 2nd episode of Grayson Perry’s excellent series of Channel 4 programmes regarding class and taste. This edition focused on the middle classes, and amongst the many eye-opening visits Perry makes on his travels, is one to a mother-and-baby group in a place now more a cliche than a real town, Tunbridge Wells. In a conversation between the artist and one of the new parents, a mother admits that her and her husband had spent the evening researching fromage frais with low sugar content after being aghast at the amount of the bad stuff lurking in the Petit Filous that her daughter enjoyed. I must admit, that as someone who has often considered herself lower middle class, I was relatively shocked by what I saw as ludicrous fretting on the part of this mother.

However, I knew already that this existed and is not something restricted to food. The mothers mentioned above were also all in resounding agreement over their worries about “toxic” baby clothing. And this subject first caught my attention when thinking instead about the decline of unsupervised outdoor play. All of these branches can be brought back to a central theme of control. Every parent wants what the best for their child, but in many cases it tends to come back to what they perceive to be the best. I believe that the mothers and fathers of today use the excuse of “responsible parenting” to introduce ever-more control into their children’s lives. Outdoor play is supervised supposedly for safety reasons, as opposed to parents wanting their children’s actions remaining under their critical eye at all times. Social lives and extra-curricular activities are organised in a manner    that prioritises parental preferences and even allows them to weed out their child’s social contacts into the ones they most approve of, not wanting their kids to become attached to company that has the potential to lead them astray or influence them in a contrary manner. And keeping with the subject of the article, parents are desperate to instill their own beliefs in their children, including those regarding diet.

One of the replies I received when citing these objections was from one of these mothers, who took particular issue with the fact that I cited going to McDonald’s as a “treat” when trying to explain that letting your children eat food that is bad for them (but that they enjoy) every so often is not going to ruin their diet, nor is it going to ruin them as a person. She pondered why we couldn’t just tell children the “truth”, that McDonald’s is terrible, cheaply-made, overpriced food and that wasn’t special just because it came in a brightly coloured box. She felt that children needed to know that “decent ingredients prepared with skill and love is what makes food special.” Whilst I don’t necessarily disagree, I personally found this sentiment so sickly that it was harder to digest than the majority of the McDonald’s food this woman so loathes. Directly following this she suggests that having a homemade pizza-making party is an excellent alternative because it’s “great fun.” But what irritated me is what this woman presents so hardily as “the truth” is all merely her opinion. I’m not saying that she shouldn’t make her opinions known to her child, rather that she also allows the child to form their own. For example, it is for the child rather than the parent to decide whether they consider pizza-making parties “great fun.” Some parents not only appear to forget about their children’s autonomy, but are latently afraid of it, incase of the unthinkable instance that their son or daughter disagrees. This is something so evident in the mother’s later remarks suggesting that she is up against “sugar, salt and peer pressure”, inadvertently removing all responsibility from her own child for making their own decision to consume some food stuff, or indeed do anything, that she disapproves of.

I think the reason this incenses me so much is because I appear to remember my own childhood somewhat more than the new parents I am contending with. They seem to heap praise upon their bright little ones without crediting them with any real intelligence. As a youngster, I was given the freedom to do a lot of things that would probably make a lot of 21st century parents faint. Whilst I was raised primarily on a relatively healthy diet, I also consumed swathes of complete crap, occasionally against the wishes of my parents. I was allowed to play around outside extensively with a large ragtag group of kids from the local area, aged between 4 and 14. When I occupied the younger demographic of that crowd, around the age of 7 or 8, the older ones even told me about and my similarly aged friend about sex and swearing and all manner of other terrible things. However, the most important lesson I take away from this is that neither my diet nor this precarious experience of playing out has affected me negatively into adulthood. If anything, the latter provided me with valuable freedom and socialisation skills, which were particularly important considering my status as an only child. What bothers me the most is that the childhood experiences of these parents are often unlikely to be dissimilar to mine. It’s common to hear people of the generations slightly older than my own come over all nostalgic about their own unregulated childhoods fondly whilst completely denying the same to their own offspring. All of this whilst failing to realise that they have grown up to be successful and healthy adults completely unaffected by these aspects of their upbringing on the most part.

The middle classes seem to have got their wires crossed somewhere along the line. The parents’ concerns for their children’s wellbeings have become melded with their innate snobbery. They look to the less meticulous working classes and the way they raise their children, and have somehow managed to conclude that every feature of that lifestyle that they deem “wrong”, no matter how unassociated, contributes to a lack of academic and occupational success later in life that they so arrogantly associate with the working classes. This is obviously nonsense, but nonsense that I am increasingly convinced is unspoken received opinion amongst the middle classes. This is why the earlier Guardianistas were so determined to demonstrate their disapproval of McDonald’s to their highly critical peers. Internally, mum and dad are aware that one trip to McDonald’s is not going to kill little Jemima, but what would Tim and Felicity next door say if they found out? This all ties in with the attention to detail that Grayson Perry discovered was the utter preoccupation of the middle classes.

I am not asking middle class parents to throw caution to the wind, all I ask is that they learn to concentrate their infatuation with detail in areas that will evidently affect their children into adulthood, such as education. I also suggest that occasional experiment with risk is not the worst thing, if they truly want their kids to grow into the learned and well-rounded adults that they so desperately want them to be.

Did you spend your childhood eating crap and yet still have achieved success in adulthood? Please tell all via the comment box. I feel the intended audience for this piece will require more substantial convincing!

Either tweet me by following the big box of meanderings below or throw me an e-mail at talkingpopandpolitics AT gmail.com.

Places To Most Definitely Visit