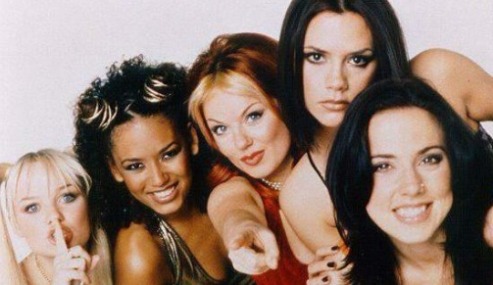 In a post that may have perhaps been more topical a week or so ago, I am going to explain my admiration of the Spice Girls. The general aim is to try and contend with the swathes of naysayers facing the girls before their performance at the Olympic Closing Ceremony last Sunday. One couldn’t navigate Twitter without colliding with someone bitter and angry about the prospect of a Spice Girls appearance, especially in conjunction with the concert’s theme, that being “a symphony of Great British music.” I can understand why many were of this mindset. Enough time has passed now since what i’m going to call the “Spice Age” of 1996-98 for their momentous fame and impact to have faded. Many young adults are now too young to even remember this particular period. The reason I wish to discuss the Girls is because the week following their reunion has reminded me of a huge glut of childhood moments that only highlight to me why the Spice Girls have more than earned their place not only in the ceremony, but in the long and prestigious history of British pop more generally.

As I have stated previously, I have spent the week with a flurry of distinct Spice-related memories ebbing their way into my brain. Receiving the cassette of the first album to appease my boredom as the parentals dined with friends downstairs, watching the video for “2 Become 1” on TV on Christmas Day 1996, discussing the vulgarity of Mel B’s tongue stud in the toilets at school, forcing my mum to get my navy Adidas tracksuit bottoms with green stripes because Melanie C had worn them in the “Wannabe” video, thinking that the girls had tied the man to the car in the video for “Say You’ll Be There” so they could kiss him, reading my friend’s Spice Girls annual in her bedroom, the poster in the corner of my childhood bedroom, visiting another friend just after Christmas 1997 and listening to her single of “Mama” together, dancing to “Stop” in the bottom right hand corner of the hall at the Summer disco, actually being jealous that my neighbour had been given the “Spiceworld” album as a present after being knocked down by a car, Melanie C on he cover of the “Top of the Pops” magazine World Cup ’98 issue,  listening to the charts as “Goodbye” became their third consecutive Christmas number one, even merely seeing their dolls in shops and their faces on Pepsi cans. The point I have summarised from this myriad of recollections is that the Spice Girls figured so heavily in mine and everybody’s lives during that period of time that it genuinely feels somewhat like an era. Those that aren’t fans of the pop music find it incredibly easy to amalgamate the Spice Girls with the barrage of bubblegum that followed them. The reality is that they were so much more. They were a phenomenon that transcended the world of pop music and fast inserted themselves into the realms of international popular culture. It’s a level of ubiquity usually reserved for solo stars, and I feel comfortable claiming that no group has achieved this since. It’s for this reason that comparison to similar groups, such as Girls Aloud for example, are entirely null and void. Whilst I extremely enjoy the output of Girls Aloud and they are similarly respected by appreciators of pop music, the comparisons tend to fall flat if one dares to venture any further into this analogy. The obvious disparity in international success is only one of the factors that sets the groups apart. For me, it’s the embedding of the Spice Girls into the public consciousness in such a short space of time that makes them so impressive. Your friends, your family, everyone you knew, regardless of age, regardless of their place in life, regardless of everything, were familiar with the Spice Girls. Even if they were consumed with loathing at the very sight of them, they could name every one, whether it be by their real names or their enduring novelty monikers.

What is even more significant than this is the timescale in which the all took place. The Spices were essentially as close as you could get to an overnight sensation before widespread internet use. Their rise was meteoric. This sentiment brings me to my first video of this piece.

This now infamous clip is just astoundingly enjoyable even with endless watches. It also never fails to make the hair on the back of my neck stand up. It of course helps that “Who Do You Think You Are?” is quite easily my favourite Spice Girls track, but just sensing the electric atmosphere of the arena and seeing the reveal of the now iconic Union Jack dress is a delight. I chose the version with Ben Elton’s full spiel beforehand on deliberately. Dodgy jokes aside, I feel it encapsulates what i’m trying to put forward. More specific contextualisation helps here also. One has to consider the fact that the girls were relative nobodies only 8 months prior to this recording. My assertions about their remarkably swift ascent into British popular culture can be observed in the following example from only a month after the events of the above video.

To be lampooned on such a scale was a sign that Spicemania had truly arrived. Not solely via a “French & Saunders” sketch but a nationwide fundraising opportunity. Whilst I was younger than the girls that the comedians appear to be portraying, the idea that they present remains very familiar to me. As a 10 year old, myself and some classmates tried to make our own themed girlband as well. It represents, albeit humourously, what was genuinely occurring across the country at the time. The Spice Girls by now represented accessible family humour, as in only 9 months they had made themselves familiar to a widespread and diverse audience with their simple appeal and quirky gimmicks.

By the time the “Spiceworld” album rolls around, the girls are now given the opportunity to remark upon the scale of their unprecedented conquering across the previous year. They chose to do so through what I now consider my favourite video of their’s.

“Spice Up Your Life” is probably the most (or only!) concept-heavy video that the band released. The setting is a futuristic dictatorial dystopia in which the cult of Spice has taken over. The combination of these themes with the sentiment of the song feels almost like the group sticking two fingers up to those that were becoming increasingly fatigued with their omnipresence. It may sound absurd but I do feel that the video shows us hyper-exaggerated elements of the reality of the time. The band were now, in essence, inescapable in many ways. Even if one avoided the music, their corporate deals and the endless line of branded tie-in products were everywhere. By the end of the year, the group would even have forayed into cinema. Tensions were beginning to run high and saturation point was nigh.

When we get to 1998, things begin to slow somewhat. However, this less manic period produced one of the girls’ most critically-acclaimed releases. I feel as though “Viva Forever” might be the only Spice single capable of convincing “real-music”-loving skeptics that the girls possess the credibility required to be so highly lauded. Although clearly recorded before Geri Halliwell’s shock departure in May 1998, the song managed to perfectly capture the sombre mood of the group after this event. Put simply, “Viva Forever” is an irresistible piece of engaging “atmospop” and should appeal to anyone with a fondness for the genre. The meticulously created and beautifully stylised video is memorable also for being entirely unlike the band’s prior efforts. Once again, it’s almost as if the makers anticipated Geri leaving, with the entire video featuring no appearance from the group other than in animated form.

This is where I explain why I earlier limited the “Spice Age” from 1996-1998. Essentially this is because it feels clear to me that the band never recovered after saying farewell to Geri. The magic was never quite captured again. Third album “Forever” disappointed many fans as the songs were weak and the group were forced to grow up and abandon their original personas in the absence of their fifth member.

In re-iterating this brief history, I hope that I have succeeded in illustrating why the Spice Girls deserve both acknowledgement and recognition in a history of British music. For those 2 short years in the nineties, they more than certainly conquered the world. Moreover, they were not only a British group but unabashedly so. Not only in blatant gestures such as the infamous dress, but in their entire demeanour. For a particular generation they represent 1996-1998 better than anything else, and I can unashamedly say that they will always signify something special to me and undoubtedly to many others.

Either tweet me by following the big box of meanderings below or throw me an e-mail at talkingpopandpolitics AT gmail.com.

Places To Most Definitely Visit